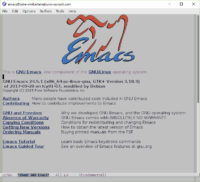 I’ve blogged about building Emacs 26 on WSL before. The text mode version of my WSL build always worked for me out of the box, but the last time I tried running an X-Windows version, I ran into rendering issues. Those rendering issues unfortunately made the GUI version of Emacs unusable on WSL. Nothing like missing the bottom third of your buffer to cramp your style. Or your editing.

Going all in with Emacs 26.2 with Cairo

I’ve just built the newly released Emacs 26.2 on my Ubuntu WSL with the options –with-cairo –with-x-toolkit=gtk and it looks like the rendering has improved massively. I’ve also recently upgraded VcXsrv to version 1.20.1.1, so it’s not quite clear to me if this is due to improved compatibility of WSL itself, changes between Emacs 26.1 and 26.2, or the fact that I turned on Cairo or VcXSrv upgrade.

I’m still seeing a couple of odd rendering issues that I can’t fully reproduce. They’re mostly around the resizing and buffer splitting, which I can live with for now. The Cairo renderer is known to still have a few bugs, so that might be contributing to the problems I’m seeing. I’m just happy that I do have a 95% working Emacs on WSL.

One other oddity I noticed is that I have to specify -d to set the display if I want to enable the GUI. Setting DISPLAY in the environment doesn’t quite seem to do the trick for now. I will keep playing with this a little more to see if I’m overlooking the blindingly obvious.

There’s also a little issue with Emacs not being able to connect to VcXsrv if I just specify -d localhost:0.0. This should work but the only way I can get it to work is by using -d 127.0.0.1:0.0. I suspect that’s because I recently added IPV6 capabilities to my home network and for some reason, VcXsrv doesn’t listen on the IPV6 interface. And no, -d ::1:0.0 doesn’t work, either.

Anyway, here we have another self-referential screenshot of the Emacs UI showing me working on this blog post:

Here we go again, this time without Cairo

I ended up rebuilding the Emacs binary without Cairo support as the rendering issues got a little annoying. Disabling Cairo seems to have taken care of the rendering issues during buffer splits for now. I’ll still have to look into the IPV6 issue at some point, but for now I’m pretty happy with the final result. So for our final, final result for today, here’s a non-Cairo screenshot running the anti-zenburn theme with powerline with its default theme.

Wrapping up the Emacs on Mac OS X saga And now, an Emacs with a working org2blog installation again