Emacs 26.1-RC1 on the Windows Subsystem for Linux

As posted in a few places, Emacs 26.1-RC1 has been released. Following up my previous experiments with running Emacs on the Windows Subsystem for Linux, I naturally had to see how the latest version would work out. For that, I built the RC1 on an up-to-date Ubuntu WSL. I actually built it twice – once with the GTK+ toolkit, once with the Lucid toolkit. More on that later.

The good news is that the text mode version works right out of the box, the same way it worked the last time. I only gave it a quick spin, but so far it looks like it Just Works.

Here’s a screenshot of Emacs 26.1-RC1 running in an Ubuntu window. It’s using the misterioso theme to make the text more readable. 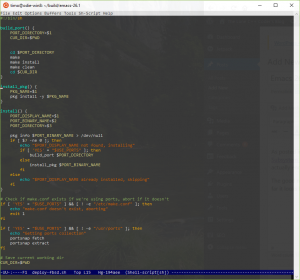 I tried it out briefly and everything worked OK. The test was too short to determine if there were any stability issues. So far, it is looking good.

Unfortunately the story isn’t quite as great when trying to use X-Windows. Under X-Windows, Emacs does not draw for both either GTK+ or Lucid. Also, the cursor disappears roughly when it gets to the mode line. The 26.0.90 pre-release I tried last year didn’t work at all with X-Windows on WSL, though. 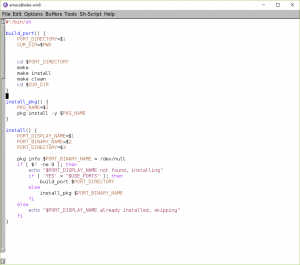 The reason I built Emacs twice with the two different UI toolkits was the missing mode line. Unfortunately it doesn’t work with either toolkit, so I suspect it’s a WSL with X-Windows problem.

It’s still a great achievement as it is a mostly functioning editor on Windows, while it believes it runs on Linux. Between the cursor disappearing when it gets to close to the invisible mode line and the mode line missing, I don’t think it’s quite usable yet. That said – as I mentioned in the prior post about running Emacs on WSL – running X Windows software on WSL isn’t supposed to work at all, so this is still a pretty big achievement!

2 thoughts on “Emacs 26.1-RC1 on the Windows Subsystem for Linux”

This site uses Akismet to reduce spam. Learn how your comment data is processed.